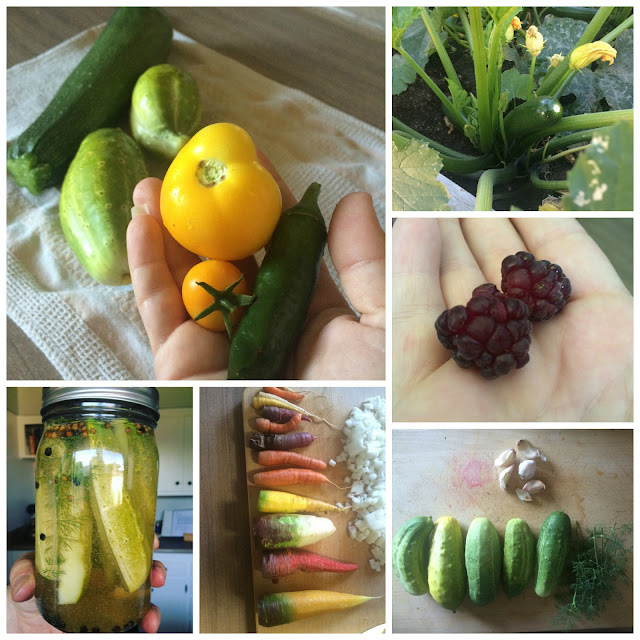 I am not the best at taking lots of garden pictures as a progression (especially with Bill and I in them), but I generally catch a picture of the produce when it is on our counter drying from being washed off and harvested.  Over the last few months we have had tons of stuff come out of our garden and have been using it as creatively and frequently as possible.  Beets, carrots, parsnips, cauliflower, Swiss chard, zucchini, cucumbers, berries, sage, dill and recently a jalapeno and a couple of tomatoes (we are about to have a surplus of tomatoes and peppers on our hands).

Over Memorial Day weekend we re-planted a good amount of our garden and as the weather warms up our garden seems to be signaling that is thrilled with the changes we have made.  Originally we had liners in the bottom of the beds, but what we realized is they were preventing the plants from growing deep roots and fruit and after ripping them out we have found much better results.

Being nine months pregnant makes it difficult to help as much as I would like, but as I look forward to my fast approaching maternity leave I am reminded that I will be able to spend lots of time gardening with a sweet baby wrapped next to my chest.  Some of their first few months will be spent outdoors soaking in the smells of fresh produce and seeing firsthand what a backyard garden is all about, and that will be so glorious.

I love summer and all the fruits and veggies that come with it.  Looking forward to experimenting a little this year and coming up with some original recipes worth sharing on here.