A Season of Reading - A Long Way Gone 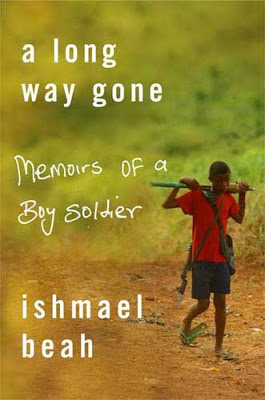 I guess this is more than a season of reading, as this post theme has lasted awhile.  In fact, I intend to make this a lifetime of reading!  I've decided it has a nice ring to it though, so for now I am going to leave this title alone.  Besides, seasons can last for years  :)

This book was kind of indescribable because you can't believe it is real.  It is all about a child's life being overtaken by war and fighting against it with all his might, and then just as quickly he is in the thick of it participating.  Not only can I not relate (which is incredibly obvious), but I also can't believe that the world we live in has encountered this reality so recently.

As it opens up, it is bleak.  A small village is described and you begin to picture a desolate climate and simple lifestyle.  Although the picture is different than my reality, there is still happiness and love in their family and friendship.  Just as you have started to wrap your head around how different their lives are from your own life (which even when you have experienced an African lifestyle first hand is hard to keep in perspective), it starts in on the story of Ishmael.  Soldiers come upon his village and everyone runs.

The chaos ensues for the rest of the book.  He is always running and trying to escape the rebel army who attacks village after village, pillaging and raping and attacking and burning and killing everything and everyone in their path.  It is so intense you cannot wrap your mind around that being anyone's life.  I just kept thinking, "This is so insane," and I couldn't believe what I was reading.  Death is a theme.

As he becomes a child soldier and begins a lifestyle of murder and drugs, I felt not just sad for him but sad for the situation.  Perhaps the most intense part of the book was when he was rescued from the war and brought to a rehabilitation center.  He and the other boys brought out of the war were like animals who had no idea how to control themselves or function in society.

Honestly, this book effected me.  It gave me a better understanding of what was going on with the rebel armies, while also giving me a more significant fear of what is possible in the modern world and the ugliness of human kind.  Free will really leaves a lot of room for interpretation and people really are free to do as they wish under God's kingdom, it just breaks my heart that this allows people like these to remain free.

If you want a book to rock your heart, I think this one really took hold of mine.  It gave me a new understanding of post war victims.  What they go through is something I pray I will never understand, I just wish that this world did not have to operate off of anger in the ways that it does.  Maybe that is naive, but all the death and loathing that comes in war seems to me to not be the reason God gave us all free will at the beginning of time.