A Season of Reading - The Reader 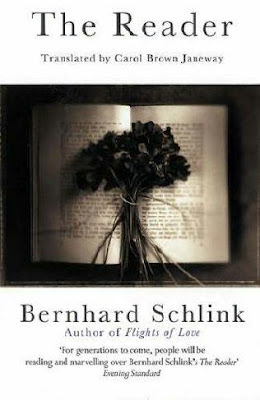 The first book we tackled for our newly established book club (we are on our third book right now) was called, appropiately enough, The Reader, by Bernhard Schlink.  Controversial in nature, this book revolves around an affair between a young boy and an older woman.  I like the Google review's phrasing that stated, "both a literary surprise and a moral challenge."  You find yourself appalled, yet you continue to read, because generally speaking it is a relationship most of us are not only familiar with but are also completely baffled by.
The first half of the book I hated, if I am completely honest, but as you see where the author is taking you, and you let them take you there, you begin to find the value in the first half.  Written from the boys perspective, you see how this choice to be with a much older woman early in his life effects his entire life, down to every relationship and every emotion.  There are moments where you feel sorry for him, because although he knew it was not a natural relationship nor was it what others would have encoruaged or approved of, she brought value to his life in a distinctive way.  However, you also find that she really digs into his psyche and sets the tone for all his relationships.  Healthy, normal relationships no longer feel healthy or normal to him after these encounters.  It really is a painful story.
The book leads to later in his life when he encounters her again in a different setting and he remembers it all so vividly, yet he has blocked it all out.  He has gone to law school married and ultimately lived a full life, but continues to feel nothing.  He just exists.   However, I was thrilled to have stuck it out until the end, because we saw some resolution come from his story and his life of loving her.  While things seem to fall apart to others, he was never present with them to begin with.  He just doesn't care for anything that way that he cared for her.  I do not agree with his lifestyle, but I think it is well presented in this book.  I think he could have overcome and been a better man, but he did not choose to do that.  It is really a fascinating story of an effected child's sub conscious.
I guess I would have to say I would recommend this book to someone who could handle it, although it absolutely set the tone for the book club.  It opened my eyes to a book I may never have read otherwise, and there was value in what the author taught.  However, I was depressed and ultimately saddened when it reached its final pages.
What I did learn through this story was that people need God.  They cannot use their own strength to recover, and I think this book shows human sadness and ambivolence at its harshest.  I pray that anyone who reads this does not validate the relationship, but sees the danger and destruction in it all.

April 08, 2019
I recently finished a book by Brene Brown titled, DaringGreatly .  It really moved me, and I am definitely still processing it. At the beginning of the book I wasn’t resonating deeply with the topic of vulnerability, as most people will tell you I am an “open book”.  I will answer most questions without holding back and love to deep dive into good conversation.  However, what I came to realize through her many examples is that we all wrestle with vulnerability, guilt and shame throughout this book even if is more momentary than constant.  I gleaned SO MUCH from this book that I did not anticipate, and I thought I would share this Parenting Manifesto that she put right at the end of the book.  I am printing it and framing it for our nursery, as I think it communicates some deep parts of my heart cry for parenting my kiddos well. I hope this resonates with someone else as much as it did with me.   I needed these words to remind me that parenting is not a checklist,
Post a Comment
Read more

June 08, 2020
For years now, Bill and I have discussed getting our own meat chickens.  We wanted to know it all.  What the process looked like, what our food ate, control their environment and make them feel safe and loved during their short life.  We wanted to give ourselves to them and sacrifice our time to them since they very quickly give their lives in order for us to be sustained.  Well 10 weeks ago we got meat chickens chicks and yesterday was our first processing day.  We learned the process of getting a chicken to alive and well to packaged and in the fridge.  It was very educational and also emotional, as we raised these birds from two days old. I will never forget how I felt taking a birds life to feed my family.  It hit my soul in a unique way and I want to stay fresh to that pain.  After I held the knife and looked at the bird and burst into tears.  Our farm mentor said "I would be worried about you if you didn't feel emotions."  I stood still for a few moments givi
Post a Comment
Read more

September 12, 2019
We had another baby in May (SO much more on that later) and blogging has obviously taken a back seat, but I am still reading for pleasure and have managed, in my sons first four months of life, to complete these 8 books!  Y'all, I remember a time when even completing 2 books a year would have sincerely sounded daunting, much less with a newborn.  If you want to read more, you can find the time!  Take stock of your days and see where you are wasting hours.  For some of these, I listened to the audio book while I was pumping or watering the garden.   Rather than give you an individual breakdown of each of these books, I just want to report I found them all incredibly enjoyable.  A total cross section of a food memoir to a psychology deep dive to nature centric novels, I would recommend them all in different capacities.   We have fallen a bit behind on our Bible reading, but we WILL finish by the end of the year. You do not make it to September
1 comment
Read more