July 20, 2011
I am a little ashamed to admit I have been following the Bachelorette this season.  However, I do want to justify my actions (for those of you that instantly rolled your eyes).  I am fascinated by the psychology of this show, and also by the quest for love that people think can be fabricated and discovered over three or four spectacular days together.  I could go on and on, but the reason I preface my post with this tangent is to say, that I saw a couple of the participants on this show partake in an event in Thailand that I found myself wanting to get more information on, and when I did it did not disappoint.
They took part in a Floating Lantern Festival in a small Thai village.  When I looked up this festival, I found that there is one in Thailand where the lanterns float in the air and one in Japan where the lanterns float on the water.  Both fascinate me and intrigue me. 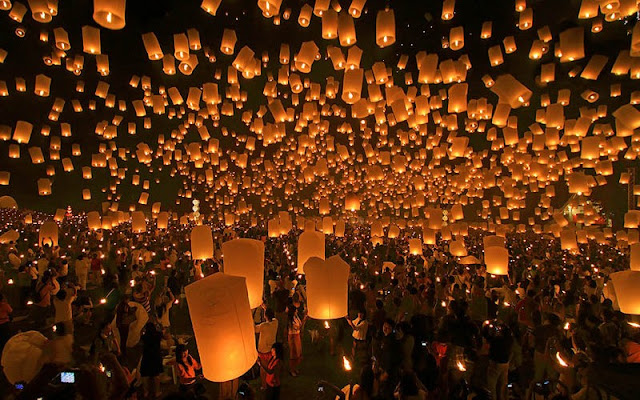 The floating lantern festival in Thailand looks overwhelmingly amazing.  In the show, they painted wishes on them and let them float into the sky.  I read that the Thai culture also uses it to symbolize sending your worries and problems up and into the universe far away from them.  It takes place in Northern Thailand around November every year. 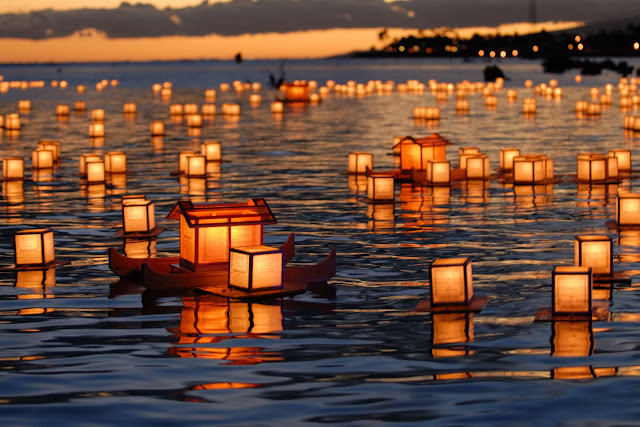 The Japanese Bon Festival takes place on the 13th to 16th of July or August (depending on the calendar your go by).  The belief is that these floating lanterns floated down the river guides the spirits of the departed back to the other world.  The white lanterns are for those who have died over the past year.  Traditionally, Japanese belief is that humans come from water, so this festival returns them to where they came from.
I would love to see both of these festivals.  Tradition fascinates me and I wish that American culture had more symbolic meanings in their cultural traditions.  I intend to develop my own traditions with meaning for my family one day.  Until then, I will read of what other cultures do and continue to be fascinated by them.